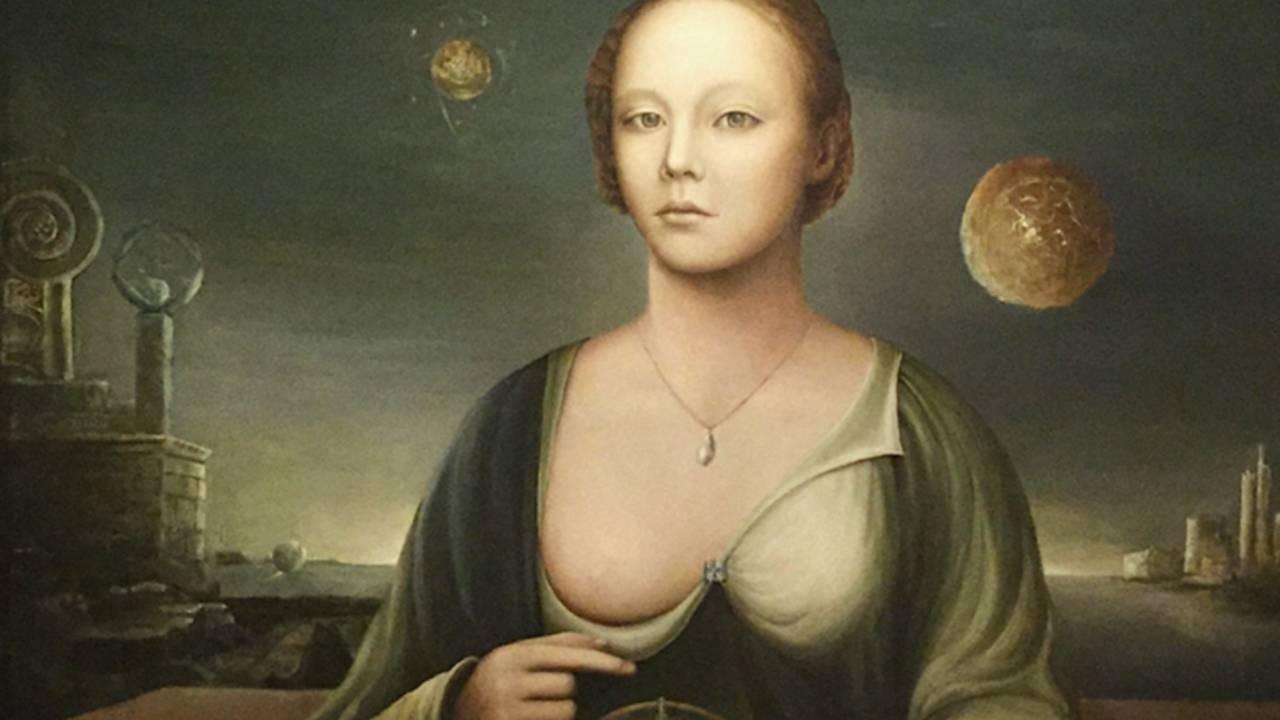 Meet Some of Norway’s Biggest Artists

If you don’t know much about the Norwegian art scene, it could be tough to figure out who the big players are right off the bat. That is why we are giving you a short overview of the styles and work of some of the biggest Norwegian artists working today. Read on!

Ida Ekblad (b. 1980) lives and works in Oslo. Her work has been widely recognised internationally. She cleverly crosses genres and artforms ranging from paintings, installations, performances, sculptures, films, photography, and poetry. You will also notice references to pop-culture, use of graffiti, found objects and cartoon aesthetics, manga culture, crafts, and even meme-culture!

Her work is vibrant, spontaneous, and inspired by among others the CoBrA art movement (avantgarde of the 1950s), situationism, and abstract expressionism. She has exhibited all around the world, including the New Museum of Contemporary Art (New York), Palais de Tokyo (Paris), Astrup Fearnley Museum and National Museum in Norway, as well as twice at Venice BIennale. Some years ago she was even featured in The New York Times.

She is currently on view at Peder Lund Gallery in Oslo with a solo exhibition  - Slice of the inaccessible. It is her first major solo show since her retrospective at the National Museum of Art Design and Architecture in Oslo in 2013. The show is on view until January 16, 2020. 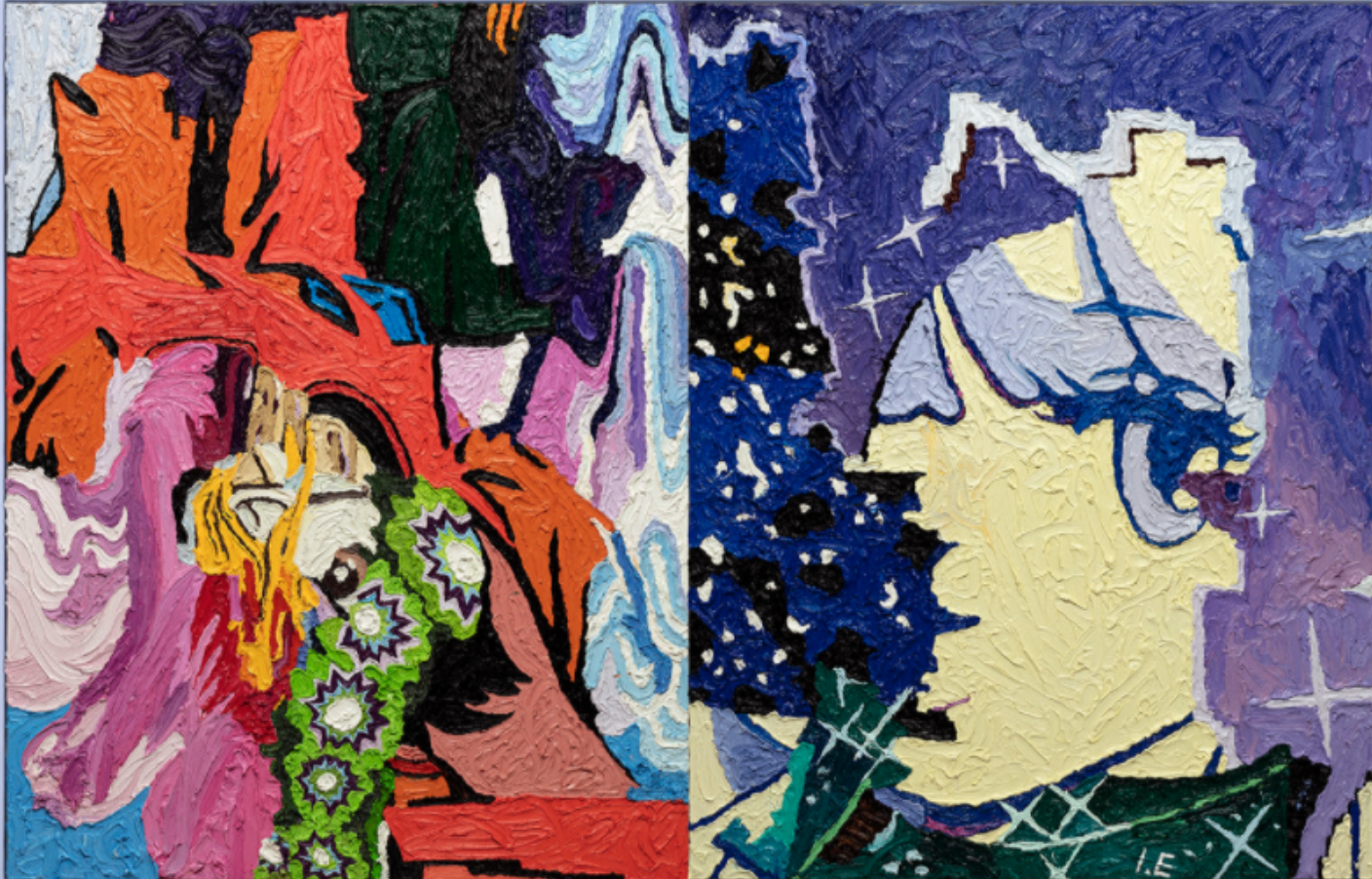 Nikolai Gyllenhammer (b. 1983) and Johnny Aaseth (b. 1985) make up the Norwegian artist duo Broslo. It is less than a decade since they began their art journey, with their first-ever exhibition in 2013 at Gamle Fornebu Kunstsalong. Neither of them has any official art education yet they found success.

Their innovativeness has attracted numerous celebrities like Pharrell Williams, A$AP Rocky, Post Malone, and The Chainsmokers to purchase their art. Socially relevant issues inspire them and appeal to youth culture, but their main goal is to spread joy and energy by using bright colours, irony, and humour. For instance, in 2018, they collaborated with Promenaden Fashion District on ‘HUG LIFE’ where they displayed street decorations with positive messages (pictured) all over the streets of Oslo. They’ve also created street decorations in Los Angeles. 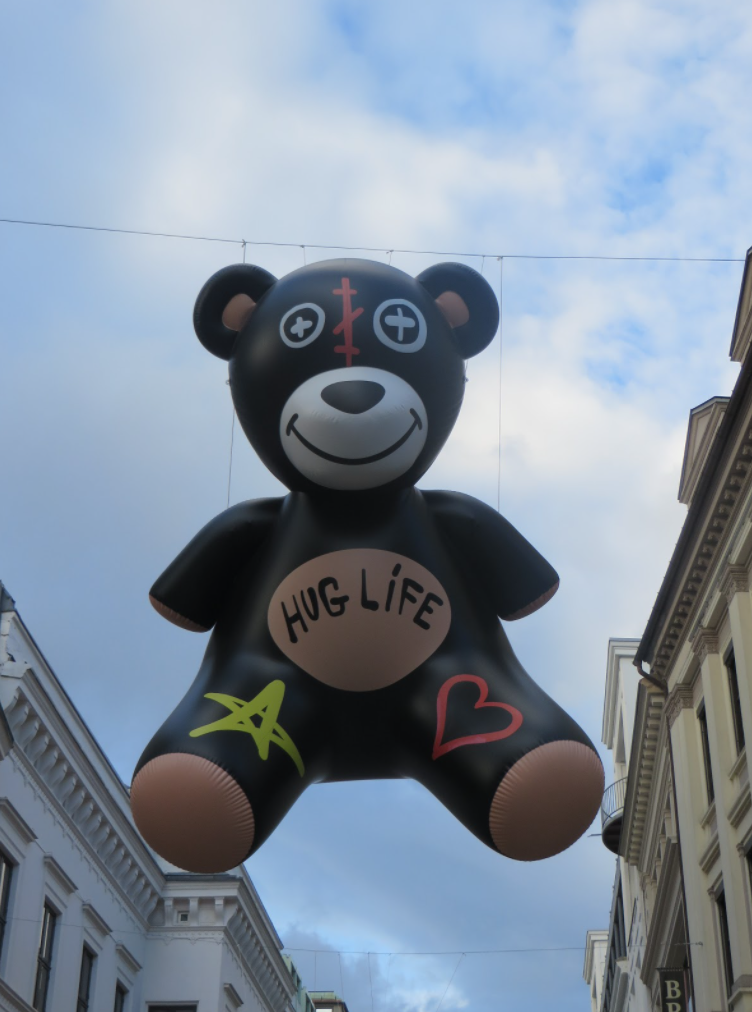 Algrim (b. 1956) is a massively talented painter with an academic background in graphics, philosophy, and art history.

Algrim is a very thoughtful artist who seeks the transition between heaven and earth. His capability of visualizing the spiritual world is widely acknowledged. He is also much requested as a portrait painter and has portrayed a number of celebrities in Norway and abroad.

In his art he applies an old-fashioned technique using an oil paint that he makes himself. The paint consists of natural earth or mineral pigments of the absolute best quality and contains the same ingredients as the masters used during the Renaissance. Algrim paints on a specially made canvas with a "fishbone" structure that requires preparation of 6 to 8 layers of lead ground, where each layer must dry for one week.

This is a very comprehensive and slow technique that very few artists perform today. As a result of this technique his work is made to last for centuries. As such, he finishes very few paintings a year and collectors are fighting to buy an Algrim painting. 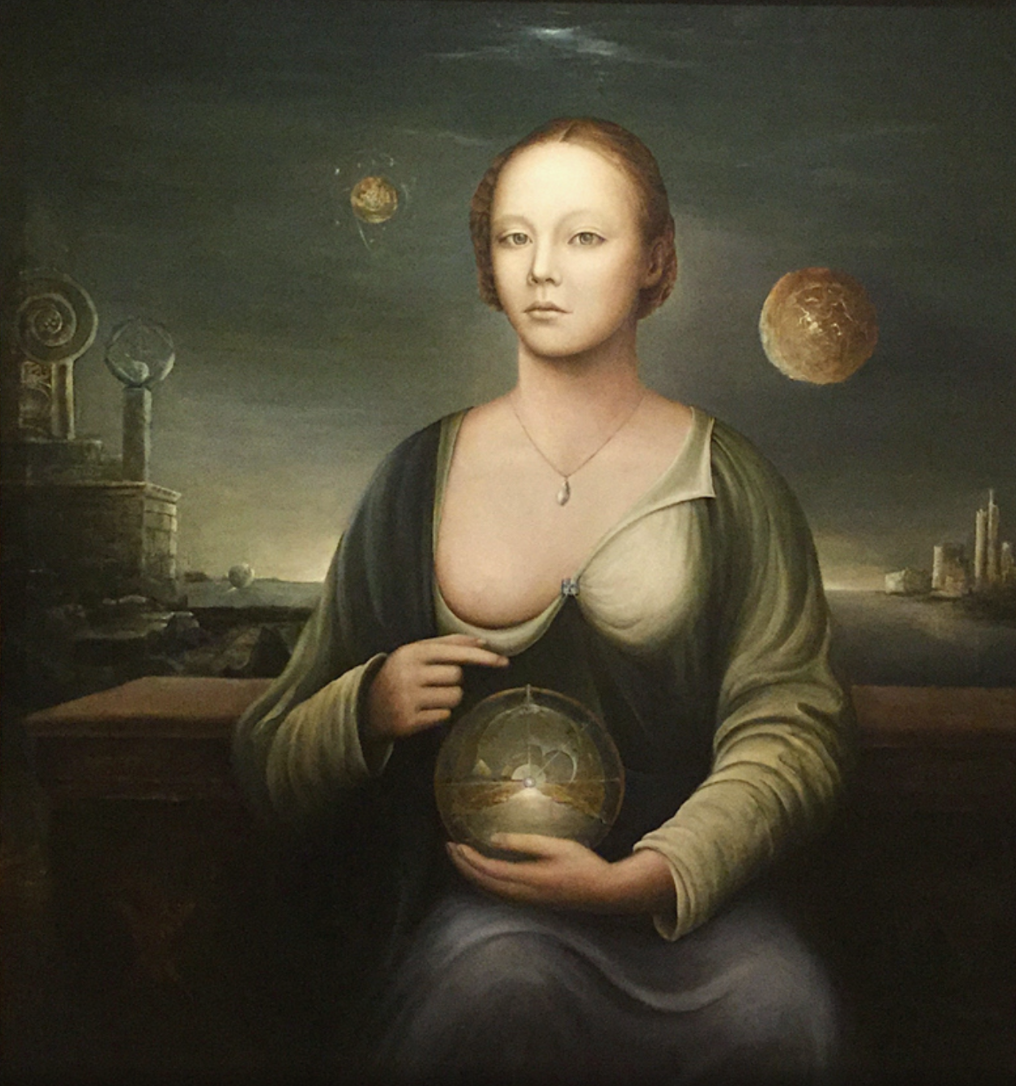 Bjørn Algrim, ‘As above, so below. As within, so without.’ Photo credit: Bjørn Algrim.

Tori Wrånes (b. 1978) is a vocalist and artist who often shocks the art world with her unconventional but magical performance art. In her 2010 performance Loose Cannon, she fearlessly played the piano suspended from the side of a mountain!

She works across performance, sculptures, videos, and installations combined with sound, costumes, props, and instruments to create dreamlike worlds that give the audience brand new experiences. You will also see trolls incorporated in her work, as she feels that they symbolise the unregulated; things outside the norm.

She has exhibited at the National Museum and you can also find her art in Ekebergparken Sculpture Park in Oslo - a 4,5-meter tall sculpture called ‘Traveler’. 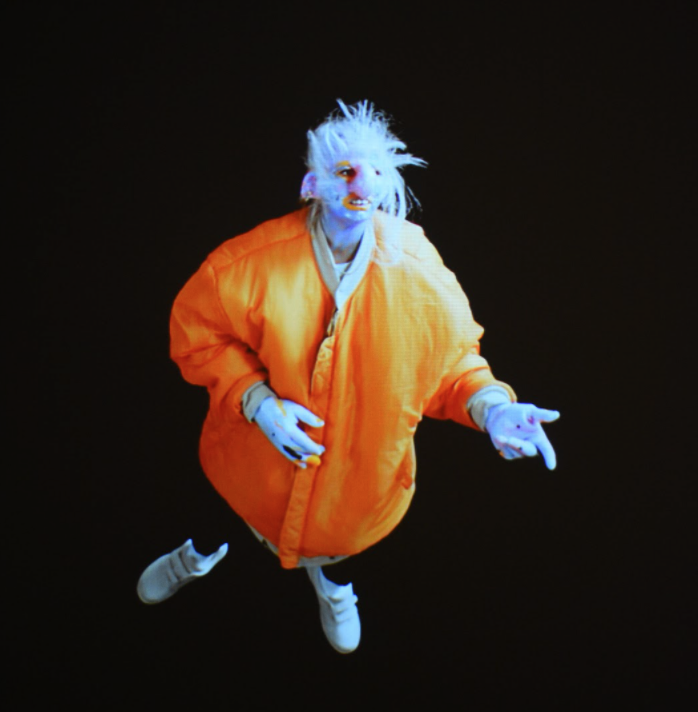 Fredrik Værslev (b. 1979) is a contemporary artist based in Drøbak, Norway, who focuses on conceptual painting. In his work he puts a large focus on the painting process where he allows natural elements or conditions, like the sun, to influence the end product.

He has exhibited in places such as the Andrew Kreps Gallery in New York, Bonner Kunstverein in Germany, Le Consortium in France, and Bergen Kunsthall, Astrup Fearnley Museum and more. 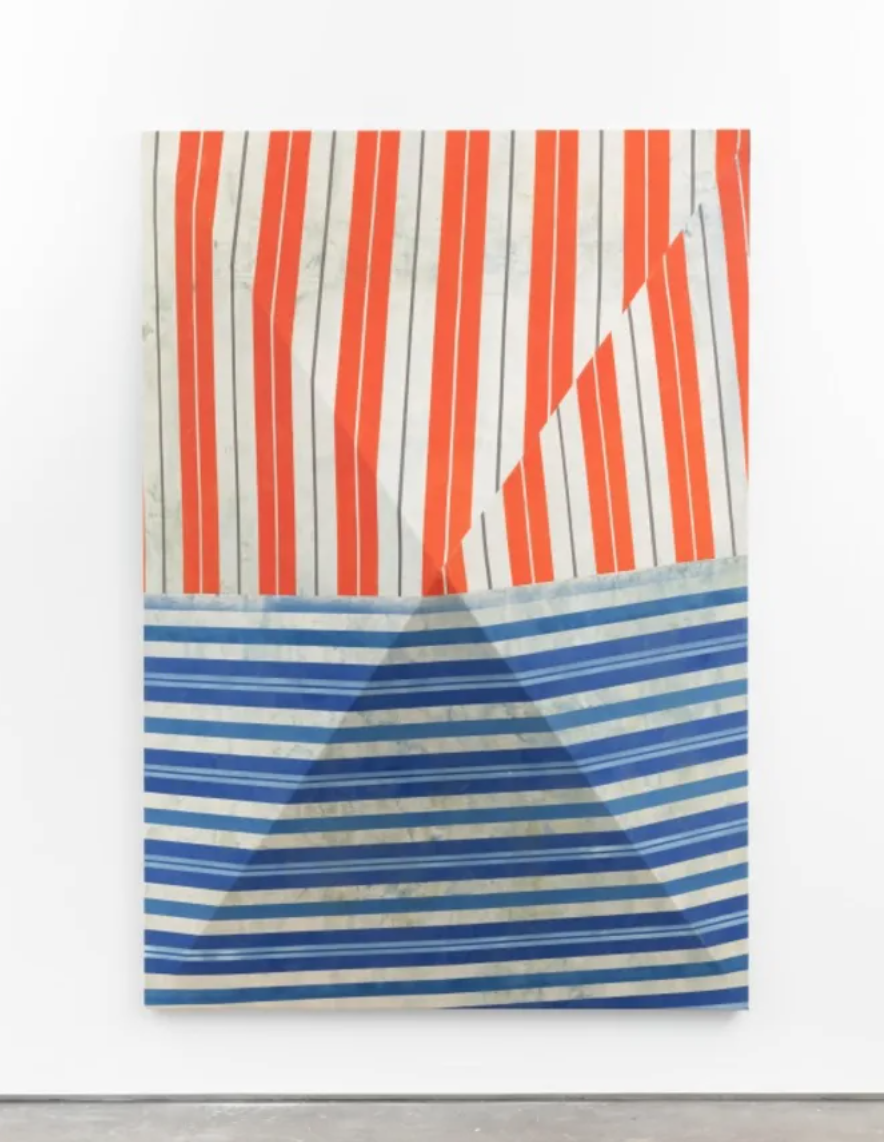 Ivan Galuzin (b. 1979) was born in Murmansk, Russia, but lives and works in Oslo. He uses paintings, sculpture, installation, and video to explore peculiar interests such as the human body and the process of decomposition. His style alternates between figuration and abstraction. In his painting series Skin, he used chemicals found in the human body instead of traditional paint, which eventually started to decay. The paintings gave off a stench and over time the paint on the canvas began fracturing off.

He has exhibited at the Astrup Fearnley Museum, Kristiansand Kunsthall (2017), Stavanger Art Museum (2016), The Armory Show New York (2012), and Moscow Museum of Modern Art (2010). In summer 2020, he exhibited a brand new installatoin called ‘Seat-of-the-pants’ at the Norsk Billedhoggerforening (The Association of Norwegian Sculptors) in Oslo. 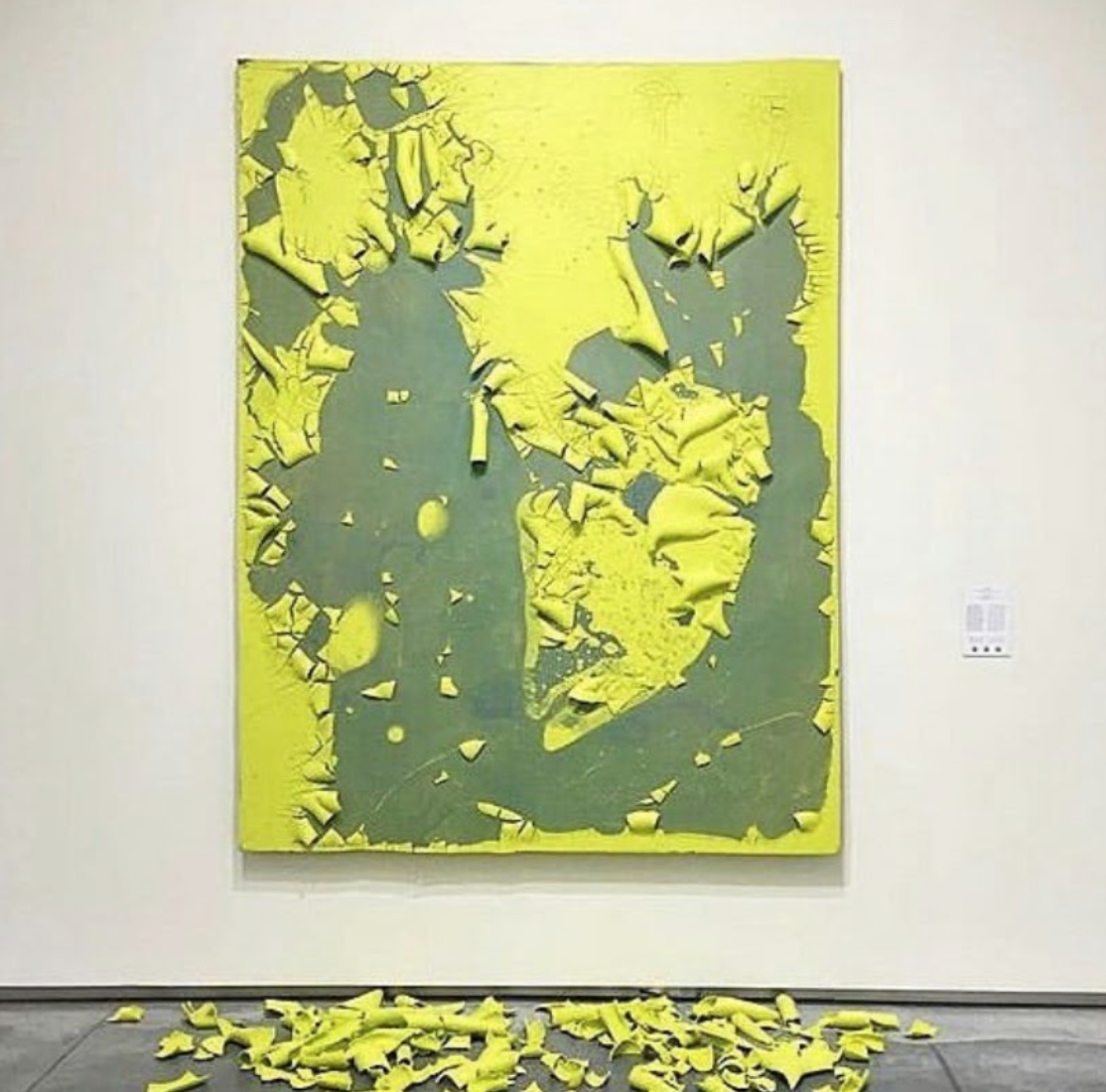 We hope this provided you with a starting point to learn more about Norwegian artists!

Want to learn more about art to navigate in the art world in a more fun and engaging way? Check out our free art series here!

Enter your email to receive information, inspiration and tips about art, art history, art events and the wonderful world of art!

Enter your e-mail to receive our art letters!

We will send a confirmation email to your inbox.